The PS41 miniature pressure switch has been designed for demanding applications where space and/or price are strong concerns. The switches utilise a piston/diaphragm design, which incorporates the high proof pressure of piston technology with the sensitivity of diaphragm designs. Switches are field…

For low pressure applications, the longevity of our PS11 Series pressure switch is hard to beat. A life expectancy of 1 million cycles means long-term reliability. Their snap-action microswitch resets automatically and meets or exceeds industry standards. The brass housing…

This versatile and robust general purpose pressure switch with snap action microswitches can be used in a wide range of hydraulic and pneumatic applications. Their proven piston/diaphragm design offers outstanding accuracy over a very wide pressure range with an outstanding 6000… 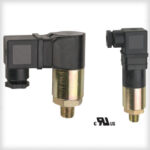 The PS75 Series pressure switch has all metal surfaces for overload stops and deliver reliable operation under extremely high pressure surges. They are designed with a wear disc and cushioning ring for increased life. The switches use a piston/diaphragm design, which…

The MCA/MCS pressure switch range has been designed with affordability in mind, the switch features 5A rated SPDT contacts and a choice of brass, zinc plated steel and 316 stainless steel bodies; adjustment ranges are available from 0.2-1 bar up…

The PPA/PPS pressure switch range offers a very rugged construction featuring a solid anodized aluminium body mounted onto a zinc plated steel flange with a choice of male threads. In addition to a rugged construction, we have decided to fit…

A leading supplier in a wide variety of high-quality components, Application Engineering offers a range of pressure switches, suitable for a multitude of applications across industries. Our comprehensive selection of single pole double throw pressure switches (SPDT pressure switches), include options for every requirement, from our affordable MCA/MCS adjustable pressure switch with SPDT contacts, to our rugged PS75 cylindrical type pressure switch, for reliable operation under extreme pressure surges. As with all of our switches, transmitters and valves, the SPDT pressure switches we supply are all tested to ensure the very best in durability and quality. Many of these switches are also available in DPDT option, and are adjustable at factory or in field. Our specialist technicians are on hand to provide any advice or recommendations you may need while choosing the best pressure switches for your application – simply complete the contact form on this page, or call us today, on 01825 764737.

Single pole double throw switches feed power from a single source into two separate circuits. The break-before-make action can be actuated using a toggle, button, or in the case of the products above, a pressure sensor; triggering a change in circuit one a pre-set pressure is detected.

SPDT switches are used in any circuit (or circuits) where one switch is required to power conflicting actions. In some cases, it may be used as an on/off switch, but they are more suited to switching between circuits that do not need to run at the same time. For example, to switch between power sources (with a momentary lapse in power as the circuit breaks), or to switch equipment between “standby” mode and “active” mode.
The precise implications of this vary according to the circuit composition, but SPDT switches are commonly found in domestic appliances, the automotive industry and heavy equipment, as a safety feature.

A single pole double throw switch is a break-before-make changeover switch; connecting a common source to a normally closed (NC) port, or a normally open (NO) port. Whether using a toggle, a timer, a button or a pressure sensor, the two circuits are isolated from each other until the switch is actuated.